Waterloo’s wealth of historical detail is famous: its battlefield, its museums, its exhibitions… And also the Saint Joseph’s church, which features 27 stones commemorating the famous battle. However, this building is also a place of prayer and a meeting-point for a community of believers which has gathered here regularly for centuries.

The Chapel Royal is the oldest part of the building, constructed in the form of a dome. The Chapel Royal was blessed on the 19th of February 1690 by the Vicar-General of the Archbishopric, in the presence of the Marquess of Castanaga, the Spanish Governor-General (Belgium being a Spanish possession at that time). A Latin inscription, still visible on the pediment of the ‘Pronaos’ (porch) refers to this occasion: 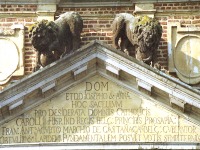 To our great and good God, and dedicated to Saints Joseph and Anne, for the succession desired by the Catholic Lords to Charles II, King of Spain and the Indies and Prince of Belgium, François Antoine Agurto, Marquess of Castanaga, offers this chapel and lays its foundation stone with a prayer for all eternity.

The Chapel Royal was restored in 1844, and again in 1968. It is topped by a cupola the four lobes of which are in the form of leaves. Light enters through six oculi and a cylindrical lantern housing eight

Each side wall is decorated with a bas-relief at the centre of a mock portal, of which the right-hand, designed by Wiener, is fashioned in bronze. It shows Victory holding a laurel branch in her right hand and a crown in her left. The left-hand bas-relief, sculpted in white marble by Geefs, bears the coat of arms of Great Britain.

Beneath the first bas-relief is written:

“Under the patronage of the illustrious Prince Frederic of Nassau, in eternal memory of the glorious victory achieved at Waterloo on June 18th 1815, this monument was erected and funded by his companions-in-arms”.

Beneath the second, the following lines appear:

“To the memory of those English officers, non-commissioned officers and their men who perished in battle on the 16th, 17th and 18th of June 1815. This stone was placed by a group of their brothers-in-arms and compatriots in 1858 AD. Both humble and noble lie crowned with the same noble diadem”.

The commemorative plaques, originally placed in the Chapel Royal by 138 mourning Belgian, Dutch and English families, are today fixed to the walls of the church, and describe some outstanding feats of arms. 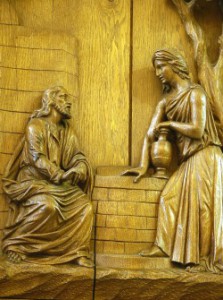 At the beginning of the 19th Century the Chapel Royal was becoming too small for the population of Waterloo, and following enlargement work, a new building was inaugurated in 1824. Construction of the presbytery (situated to the right of the church, and now occupied by the Waterloo tourist office) began in that same year.

In 1855 Madame Mouchet and the then parish priest Philippe Uelens laid the cornerstone of the nave of today’s church, which was designed by the architect Emile Coulon. The spire on the top of the tower was only erected in 1899!

The Pulpit of Truth

Probably the work of Van Hoof of Antwerp, carved in solid oak in the Baroque style, the pulpit comes from the Cistercian abbey of Aywiers. The four main panels represent the Sermon on the Mount, the miraculous draught of fishes, the Samaritan woman and Jesus welcoming the children. Below the main body of the pulpit we see Jesus with Martha and Mary.

These are now split into several sections. The central element, showing the Last Supper, is set into the wooden altar which stands in the right-hand side chapel. The remainder can be found at the edge of the chancel and in the church entrance. These communion benches are in the neo-baroque style; they are the work of the Goyer brothers, since restored by Van Hool, and come from the Cistercian abbey at Aywiers. 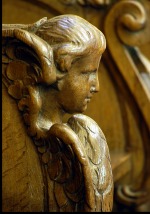 The stalls are in oak, and were purchased from the Saint Rombaut Cathedral in Mechelen (Malines) in 1863. Carved in the 17th Century, these stalls originally stood in the Val de Lys convent in Mechelen.

The Stations of the Cross

“The Descent from the Cross”, a copy of the famous Rubens, can perhaps be attributed to the brush of Frédéric Dumesnil.

Above the old high altar hangs a canvas 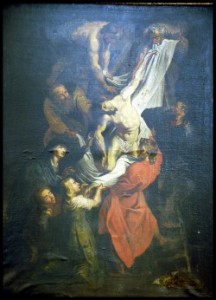 depicting the Assumption of the Virgin Mary; this is a copy of the celebrated work by Murillo, and was painted in 1860 by Fanny Coore, the wife of Willem Geefs, who during the same period created one of the bas-reliefs in the Chapel Royal.

The canvas hanging in the right-hand side chapel represents the “Healing of the Woman with an Issue of Blood”, painted in 1772 by Frédéric Dumesnil, and also came from the Abbey of Aywiers.

The Stations of the Cross are made up of 14 canvasses painted in 1848 by J-B De Coninck from Mechelen.

These six windows were made at the end of the 19th Century. The four windows in the chancel depict Saint Joseph, Saint James, the Virgin Mary and Saint Phillip. The two remaining windows were installed in 1918, in thanksgiving for the liberation of Belgium.

The old high altar is also the work of the Mechelen artist Van Hool, and is carved in thin sheets of oak.

A new marble altar, inspired by the architect Jean Cosse, was added to the nave in 2002, in order to enhance participation in the liturgy by bringing the celebration closer to the congregation. 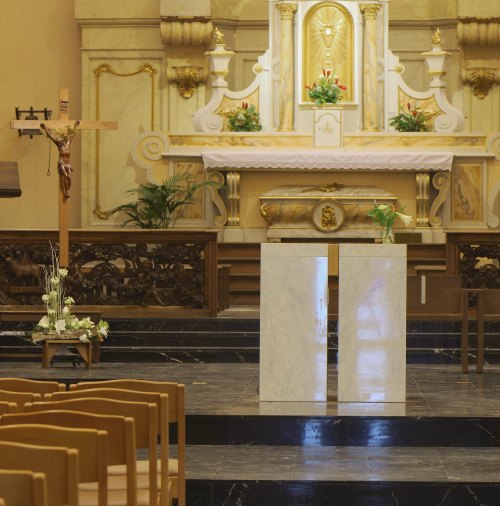 This altar, in white marble, is made up of four vertical square prisms joined at their upper face by a golden cross. The figure four suggests the four elements (earth, water, air and fire) gathered here in the cross of Christ. This altar was designed by Florence Cosse and consecrated by the Bishop of the diocese, Cardinal Danneels, on January 26th 2003. The same artist is responsible for the lectern.

Statue of the Virgin Mary

The Virgin and Child, which remains today the focus of considerable fervour, is a Baroque ‘procession’ statue. The faces in polychrome wood are from the 19th Century.

Opening hours of the Church:
Every day, from 8 am till 7 pm